Bollinger bands - forex indicator was designed by John Bollinger, founder and president of the Bollinger Capital Management, Inc. specializing in investments and funds management services rendered to individuals and corporations.

J. Bollinger gained a global popularity because of so called "Bollinger Bands" gained a mass recognition and used in most part of modern analytical computer applications.

Over a long time, John Bollinger had been working as a chief analyst of the big cable channel Financial News Network (FNN) publishing financial news.

In appearance Bollinger Bands resemble moving average envelopes expressed in the per cent form, but have a notable pecularity: in Bollinger Bands the size of vertical shift of Moving Average line is expressed by a certain amount of standard price deviations (unlike moving averages envelopes with external borders formed by a vertical upward and downward shift for a certain constant amount in per cents).

Central line of BB is the moving average, from which Bollinger Bands are drawn up and down. Bands are remoted from central line for an adjustable distance equal to the coefficient for multiplying standard deviation). Taking into account that standard deviation depends on volatility, bands adjust their width on their own. Under unstable market conditions, it grows and declines in stable periods: 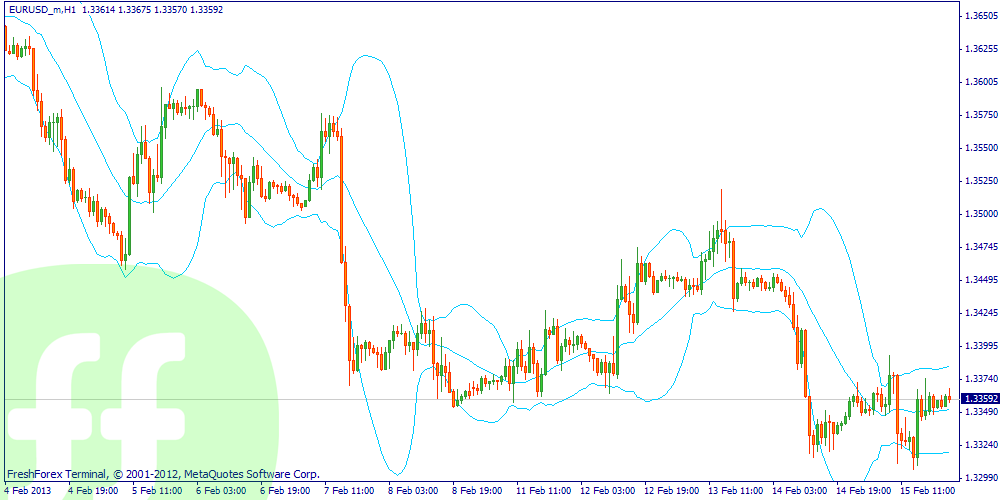 Bollinger Bands can be put on both price and indicator's chart. John Bollinger recommended following parameters for building BB: averaging period for moving average is 20, the number of standard deviations – 2.

Price intrinsically stays within Bollinger envelopes (between upper and bottom borders). Interpretation of this indicator is based exactly on this trait of price. The range between top and bottom bands reflects volatility and in the result it changes. High volatility extends BB, whereas low volatility ensures that BB are narrow. 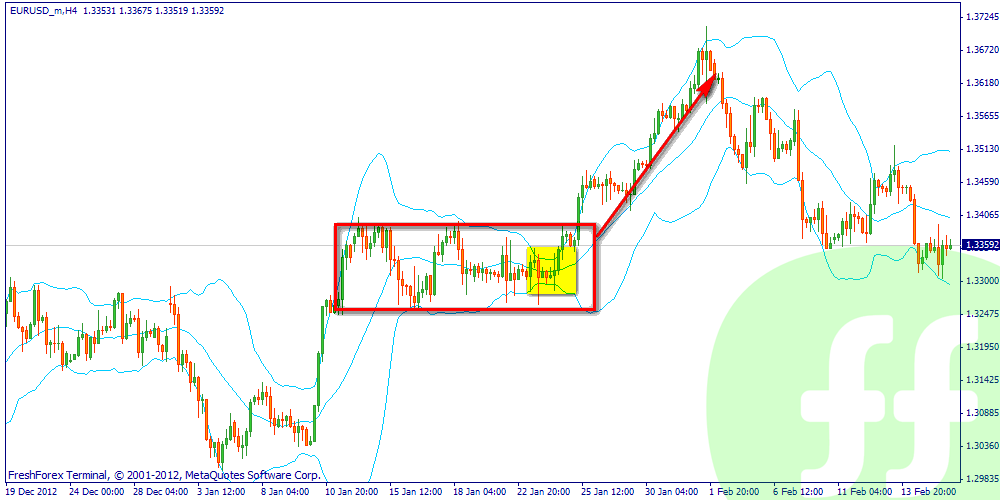 On the picture you can see: red rectangular shows that price is based in flat range and BB gradually fix decline of volatility. Then in yellow rectangular zone is marked, where bands are narrowed, and then price broke up along with a strong trend movement commenced.

Thereafter the price reached peak, BB showed decline of volatility and reversal of chart down, and broke of bottom band down.

It should be noticed that on growing market price never went down to the bottom band even under retracement.