Relative Strength Index (RSI) — is one of the most popular indicators (oscillators) of technical analysis. Its author is J. Welles Wilder published his research as early as in 1978. All information about RSI can be found in the "New concepts of technical trading systems".

Essentially, RSI is exactly the relation between average value of positive growth of close price to the sum of average values of positive and negative increments. RSI fluctuates within the range from 0 to 100, because average value of the index is multiplied to 100. The shorter applied period for this indicator is, the more sensitive towards price fluctuations it gets. 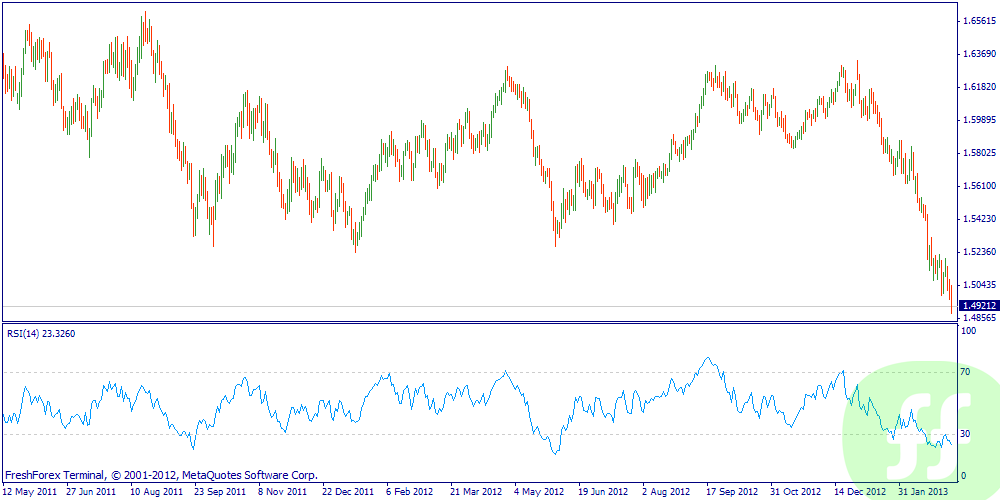 Overbought and oversold levels are set for the indicator. Overbought zone is the space above 70, whereas oversold zone is located below 30. When RSI reverses in overbought zone, it gives the possibility of further decline of price. If RSI reaches oversold zone, the probability of growth of price gets stronger (watch pic.)

The indicator's helpful feature is that in some cases formation of RSI reversal on the top and bottom points occurs earlier than reversals of price itself. That allows opening transactions with lower risk.

Besides, for interpretation of RSI figures you can turn to methods of classical chart analysis. It is very often when patterns of chart analysis form a little earlier than such on price chart. Support and resistance levels and lines are instant on RSI chart.

Signals of highest importance conveyed by RSI are divergences. When the price forms new highest points, and RSI chart does not show them, it is known as divergence. More often, if oscillator does not confirm new maximum points of price by its extreme points, it puts in doubt the probability of further growth of price. After such a signal is formed, you can choose trading strategy awaiting for breaking support level that corresponds to the last local minimum point and opening a short position (watch pic.)

When the first top of oscillator is based in overbought zone (that is to say, above 70) and the second top is beyond this zone, divergences play greater role. The opposite situation may occur in overbought zone. When price is forming a new minimum point and RSI curve is not, we face a typical divergence – signal for purchase.